Is Something Wrong With Texas Home Prices? 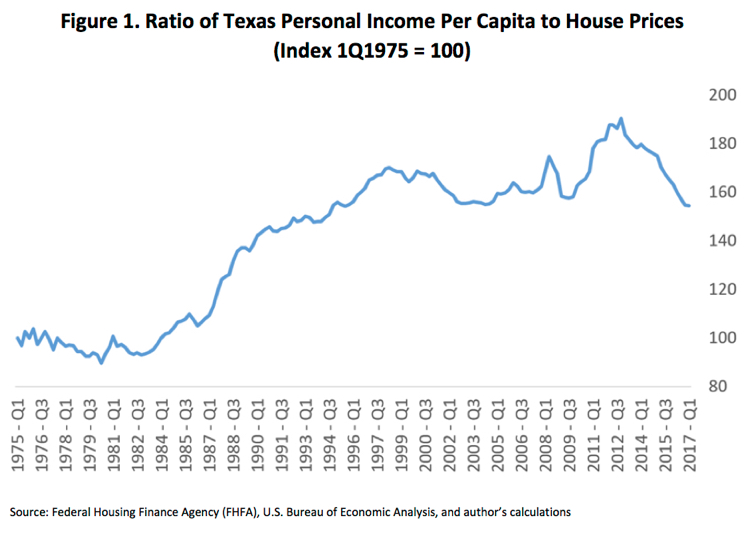 A number of factors influence price movements in housing markets. On the supply side, building permits, housing starts, construction costs, land costs, and other factors affect changes in home prices. On the demand side, prices are affected by demographics, income growth, employment growth, interest rates, and locational characteristics such as schools, work centers, and transportation.

The Federal Housing Finance Agency (FHFA) house price index is estimated based on housing market fundamentals; it then is compared to the reported FHFA price index. This is the same methodology used by Case-Shiller in 2003 and now applied to Texas and the major MSAs (Austin, Dallas-Fort Worth, Houston, and San Antonio). This methodology was one of the first to point out the formation of a housing bubble in the U.S. housing market.

Comparing the computed values to actual prices might show if there is a misalignment in prices. If actual prices are higher/lower than the estimated price, then prices are growing at a higher/lower rate than what is explained by fundamentals, and possible issues in the housing market may be indicated. In the long run, overvalued/undervalued home prices should revert toward fundamentals, eliminating any differences between them.

Comparing the FHFA price index for Texas to the estimated value, there seems to have been a misalignment since 1Q2015. This suggests that recent price changes cannot be explained by supply and demand fundamentals alone (Figure 2). The same misalignment is observed in Austin since 2Q2014, in Houston since 4Q2014, in DFW since 1Q2014, and in San Antonio since 2Q2015 (Figures 3–6). This points toward a possible overvaluation of home prices at the state and MSA level. 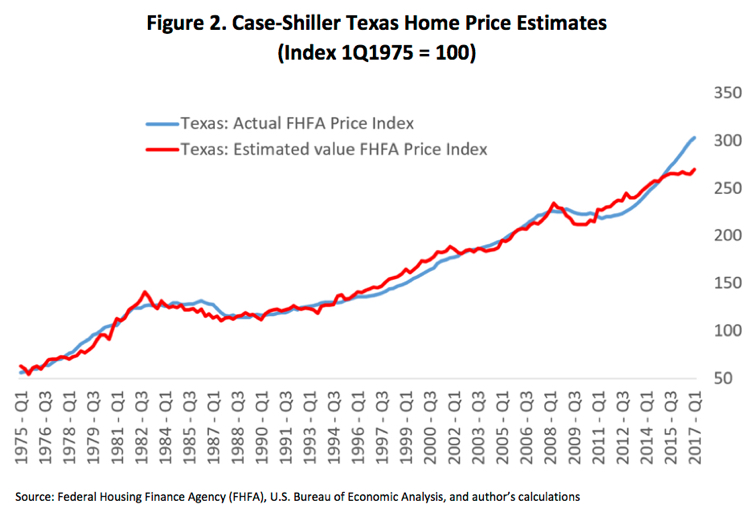 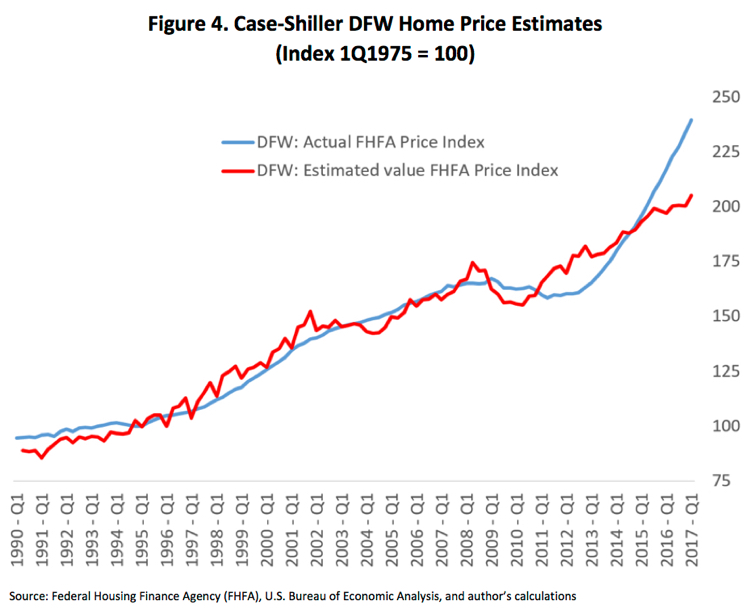 Making the comparison between FHFA actual and calculated index prices for the U.S., the estimates confirm the Case-Shiller results from 1Q2004 to 2Q2011 leading to the housing boom and subsequent bust (Figure 7). After the second half of 2011, estimated prices have been below actual prices, indicating U.S. housing prices could possibly be undervalued. 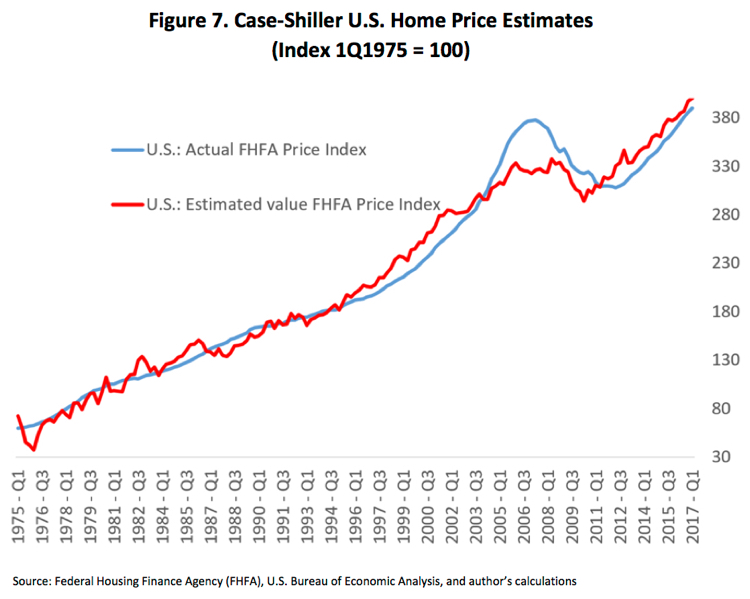 Even though housing starts represent supply fundamentals, it could be they are not capturing the supply constraints faced by homebuilders. In the aftermath of the 2008–09 Great Recession, housing supply has been held back by the lack of developed land, putting upward pressures on land costs for homebuilders. Other constraints include high costs of labor and materials, reduced profit margins, and an incentive to construct homes priced more than $300,000. The months of inventory for housing less than $250,000 is at historical lows in Texas and its major MSAs (Figure 8). 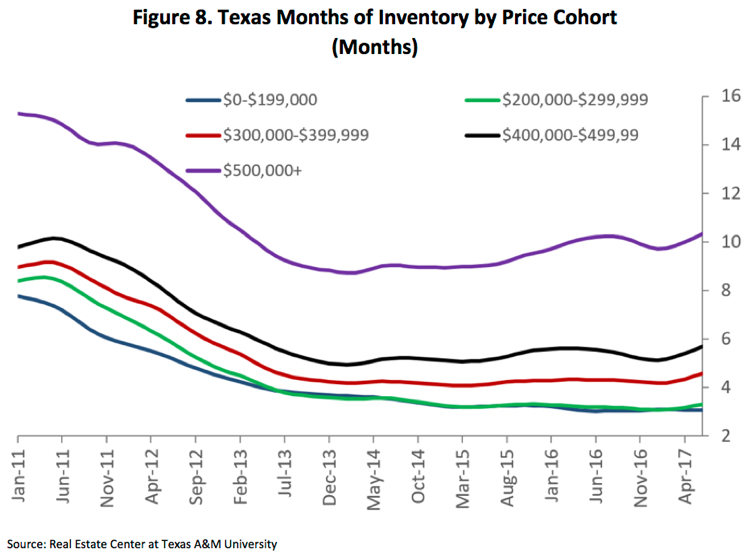 Identifying home price misalignments between actual and balanced prices is not easy. Even more difficult is determining with certainty the formation of housing bubbles. There is no sure way of knowing what prices “should be," even when considering supply and demand determinants, since they change over time.

No one single methodology offers complete confidence in its predictive power to determine if house prices are overvalued or undervalued or even if a price bubble is forming. That is why various methodologies can be used to complement each other, but each methodology has pros and cons.

The methodology introduced by Martinez-Garcia, Grossman, and Torres in a Real Estate Center (RECenter) 2016 article provides evidence regarding Texas' 25 MSAs record episodes of “explosive behavior" in house prices, that is, a misalignment in current actual prices from their fundamentals-based computed prices. The College Station-Bryan MSA, for example, had a period of explosive behavior beginning in 2Q2016 that continued into 2017 (see map). 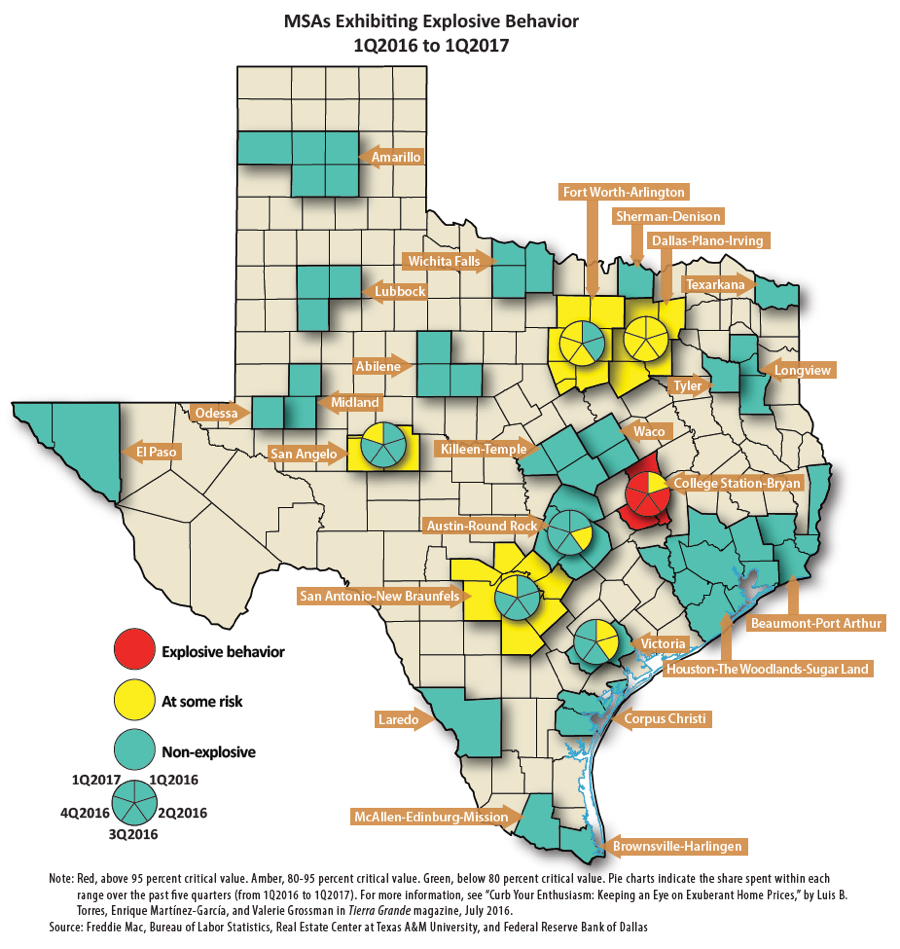 Recent price movements in Dallas, Fort Worth, San Antonio, and San Angelo also warrant careful attention, but Texas shows no current signals of overheating. These regions should be tracked for possible misalignments with economic fundamentals of demand and supply, since Dallas-Fort Worth and San Antonio coincide with the Case-Shiller methodology findings. The findings also coincide with methodologies for the College Station-Bryan MSA and should also be monitored.

During the U.S. housing bubble, homebuyers were motivated to invest by strong expectations about future price changes. Homebuyers generally perceived little risk of a possible fall in housing prices. Emotional and casual word-of-mouth factors played important roles in their home-purchasing decision. All these conditions that were present during the run-up of the U.S. housing boom are difficult to measure and based on the feedback and comments of housing market participants, seem not to be present currently in the Texas housing market or in the major Texas MSAs. At the same time, the market did not face a significant supply constraint causing sale inventory levels to fall to historical low levels.

The major contributor to the current possible misalignment in home prices appears to be a significant supply constraint in the Texas housing market. This is something that RECenter will continue to monitor and analyze.